A co-production is not just a concept, it is a meeting of minds coming together to find a shared solution. In the game development business, a co-production involves people who create and consult, and it also includes different models of work with various professionals from the moment the project starts to its successful launch. When two companies work together creating a new product, they need a well-developed infrastructure and people who will make sure that everything goes smoothly.

When talking about software development models, especially in game development, there are several different arrangements. Venture capital allows startup companies to get money from investors for long-term growth. Then there's outsourcing, a practice often used by different companies to reduce costs by transferring portions of work to outside suppliers rather than completing it internally. Outsourcing has been one of the most popular business models among Ukrainian IT companies but in the past few years other models have begun to develop more actively and gradually started to compete with outsourcing.

One of the conventional solutions that is often used for development is in-house development which refers to conducting an activity or operation within a company instead of relying on outsourcing. A company utilizes its own employees and time to keep a division or business active. Full in-house development can be done by an experienced game development team. Otherwise, it is a high-risk arrangement, no matter how strong and interesting the idea is. The best option is, of course, a partnership or a co-production. This offers the perfect match with a team which consists of different players such as investors and businessmen, and creators who come together with common ideas and business solutions.

Another model is independent game development which is the creation of an indie game by an individual or small team of video game developers and, usually without a significant financial support from a video game publisher or another outside source. There are many indie studios, many of them are often (though not always) centered around a single product and cannot go beyond its scope. Others, in fact, are startups, which have not received funding from venture funds and exist on the model of self-financing. In any case, only a few indie studios manage to achieve a tangible return.

The growth of game development businesses and the potential of advertising models helped each of these forms to determine the indicators of success, motivation, and developers' control over the final product. For example, startups with venture capital investments have great motivation but history suggests this type of work has a low probability of success. In many cases, startups fail not because of a lack of creative/technical skills but because of a lack of administration, organizational and business skills.

The outsourcing model provides more experience but quite often the motivation of the leading players is low, because of no accountability for the performance of the product after the development part is completed; the company is essentially an agency for customers and is responsible only for making sure the result meets the client's requirements but rarely for the commercial success of the final product.

Many outsourcing companies want no more than to just write the code, get paid for it and that's where their interest in the project usually ends. There is no sense of ownership and pride in workmanship and sometimes the final product suffers for that reason.

A partnership is probably the most optimal business model where at least one party of the co-production is experienced; and importantly, both parties, are motivated to create a critical and commercial hit. In terms of risks and benefits balance, a partnership or a co-production achieves the highest level of success.

iLogos which is one of the leading European independent game development and co-development companies has found the co-production model is most effective and yields the best results for both parties iLogos started out using the outsourcing model but has now evolved into using the co-production model as its main mode of operation. It has already launched several successful projects with global partners completed as co-productions and this is iLogos' preferred business model at the moment. 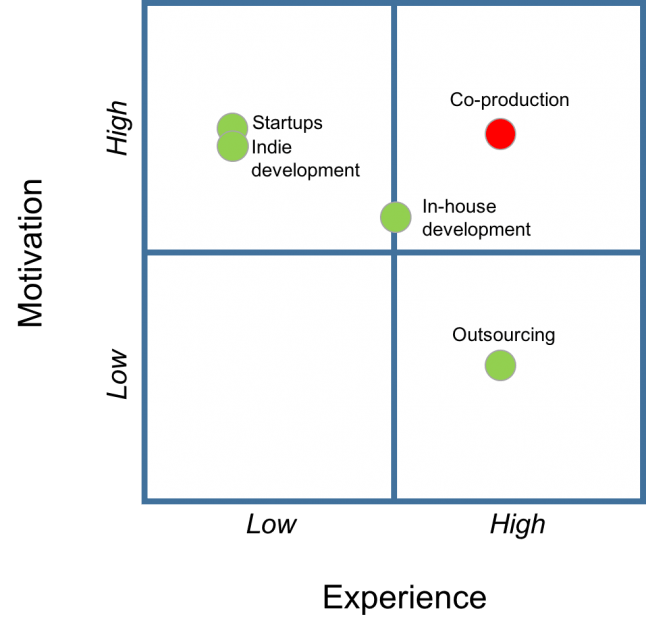 Locally grown grape is cheap and very juicy
iLogos uses the co-production method as its main business model because it means that both the idea owner and developer share the game development costs as well as the game revenues. The results can be more appropriate and more valuable, sometimes even surprising for the co-production partners. A co-production with iLogos is based on the revenue share model which has many different forms though each of them involves sharing profits/losses, in other words, risks, among the parties to a specific project.

It is obvious that partnership programs can allow every party to fully and optimally mobilize resources in order to get first-class results, interesting ideas and, in the end, create something really great.
Co-production with the right partner
With the right partners for cooperation in game development, such as iLogos, for example, the process of creation will be understandable, the co-creation along with the co-production is the perfect option for the synergy. The more ideas occur, the greater heights will be reached. Contact us to launch cooperation.
The original article was posted at Gamasutra. See original